Flew the Coupe! – Part 19 – Woodstock gets some bling!

Don’t just sit there, do something!

So with the fires this summer and the disruption of a job change I was not flying much.  So I made a list of things I should do to Woodstock.  I have thought about things I could do to make Woodstock a bit more distinctive and in one case a bit safer.

Woodstock can be slippery!

So it can be wet in the PacNW an even icy!  To get into the cockpit of my coupe you have to walk up the metal wing root.  It can get slippery!  They make special materials to create a non slip surface for folks to walk on.  Some folks call that “wing walk”.  I little internet research pointed me at a stick on material available in strips.  Several types exist.  I picked one that used a rubber material but no sort of mineral no slip material. (think the “sand” on “sand paper”).  I chose “RAC WING WALK” :

“RAC wing walks are not made from the usual, sandpaper-like material, which can decompose and scratch both the wing surface and your knees. Instead, they use a low profile, synthetic rubber, that combines a comfortable feel with good gripping power.The RAC wing walk comes pre-cut to 26 1/2″ x 9 1/2″. Installation is easy with the aggressive, self-adhering backing. Each wing walk comes rolled in its own, 4″x3″x10″ box and installation instructions are also provided with each box. Black . ”

I ordered 3 boxes with the first order I made of stuff from Woodstocks first annual and it had been sitting around the hangar for some time.  Well, it was time to apply the stuff.  I could just lay the strip s onto the wing roots in some simple normal fashion or I could make it little different.  I decided to cut the strips into separate pads and then stick the down along the wing root.  Here is the result: 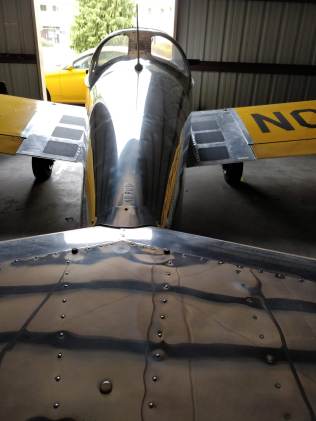 Note: I have since removed the air bubbles.  So Woodstock is less slippery!

Woodstock is cool enough for art!

I had wanted to add some nose art when I first got Woodstock.  I knew I wanted something but I still didn’t realize my Ercoupe was Woodstock.  That came when I started looking at possible images.  I searched all the popular (and sometimes less than popular) cartoons.  I even tried to contact a couple of cartoonists but never goat a response.  But I kept coming back to this:

You don’t have to spend much time with my coupe to realize he is this very happy little yellow bird.  So I came to call my Ercoupe Woodstock.  Perfect.  But then where would this art go.  I had been given awesome cowl badges that I had already mounted:

So the art wasn’t going to go on the nose.  Maybe the vertical fin.  I tried to find a local artist to actually get it painted on but no luck.  Maybe I could find some stickers the right size.  Well that did produce some results.  I found these:

Those would be good but they were just the outline, I would need to add some sort of yellow fill or background.  I considered just air brushing some yellow in the rough shape of the sticker then putting the sticker on top of it.  But a friend suggested a local sign shop that might be able to create the complete image.  Additionally I needed to order some lettering.  A couple of weeks later I had it all ready to put in the fins.  I ended up ordering the image larger, maybe even too large but here is the finished result: 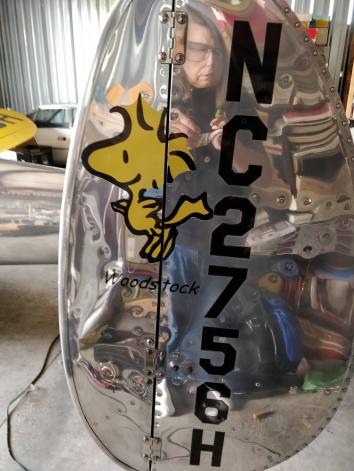 Came out pretty good if you ask me!  But wait, I wasn’t done yet!

Don’t Cool Car Hubcaps from the 40’s have the Maker on them?

I remembered seeing older American cars that had hubcaps that had the company name on the hubcap.  Here is an examaple: 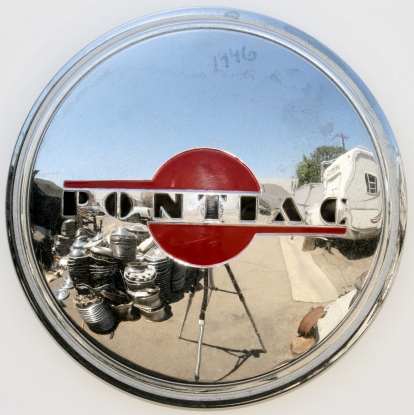 Pretty cool if you ask me!

I am still looking at things that might make Woodstock even more stylish.  I am considering a stripe down the fuselage.  Not sure about that yet.  In the mean time I continue to polish.  I think that the interior may deserve some attention as well but I think it is currently close to original and I am not sure how much I want to change that.

I am considering a radical change in the panel but that will be a LOT of work.  I have an IFR capable instrument panel which really is odd for an Ercoupe and definitely overkill for me.  Here is my panel:

Here is a good example of a close to stock panel:

Notice the glove boxes and the cool stripes and trim.  This is maybe closer to what I’d like.  Of course I should call out that my vacuum instruments don’t work and at least one gauge is a mystery! 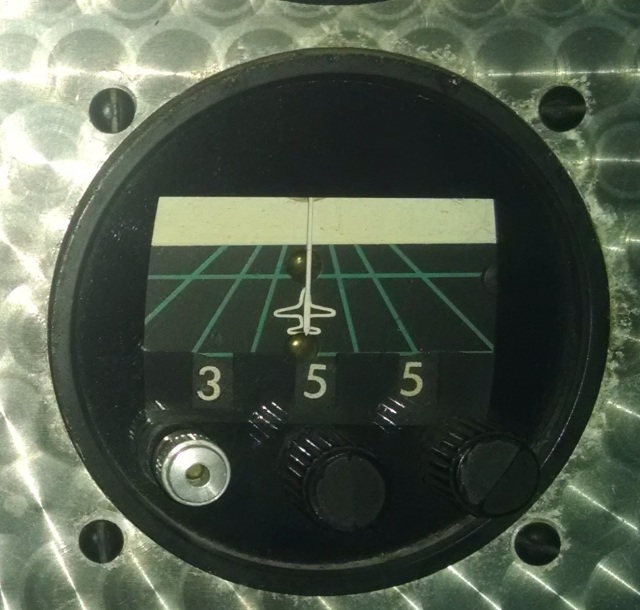 I think it is related to the VOR somehow but I am not sure how much I will every use the nav radio these days.  I have a GPS in the plane and just bought a GPS capable tablet as well.

Well, if you own a plane you will never run out of stuff to do!

I’m trying to get caught up on the blogging so expect more blogs more often.  I have a few planned not related to Woodstock.  I’ll tag those differently to make them easy to know if you are interested in them.

For now back to thinking the thoughts that need thinking!

This entry was posted in Aviation, Creativity, Entertainment, flying, Uncategorized. Bookmark the permalink.